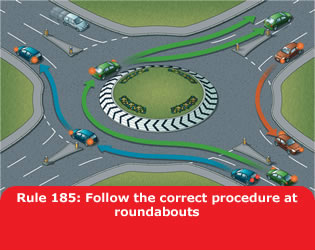 One of the most infuriating things you encounter while driving is people who have no idea how to indicate correctly at a roundabout. It’s really simple (as you could see if you looked at the Highway Code), but here’s a very simple set of rules off the top of my head.

There’s very little that’s difficult about this, so it’s amazing to watch people going straight on and thinking they need to indicate right, or just indicating right by default until they decide to surprise everyone and take an exit. Or the marvellous creatures (normally in big German cars) who give nobody any indication of what they’re doing.