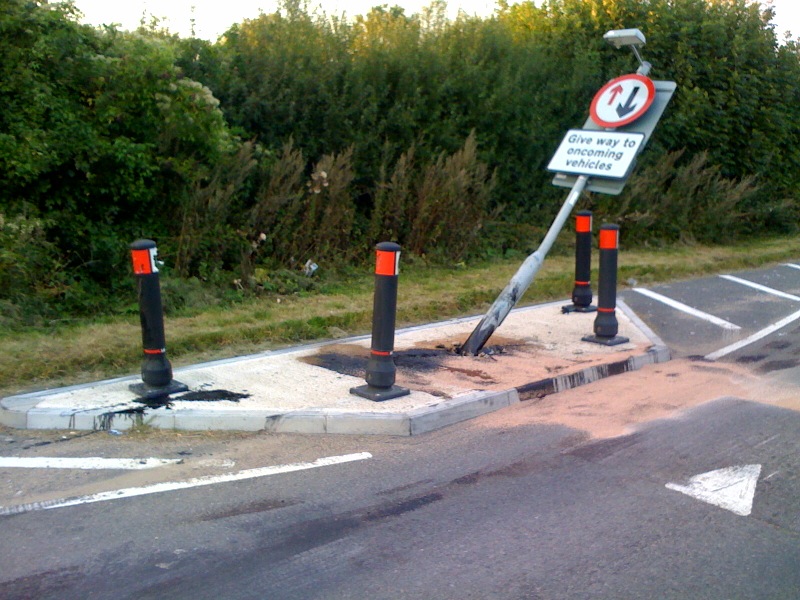 The excellent Keith Code (google his A Twist of the Wrist books and DVDs) theorises that as a driver you have a certain number of concentration points to spend while you’re driving or riding. Let’s say a driver has 100 such points to spend while driving. A new driver, for example, might spend 20 of these mastering controls like gear-changing, use of pedals, indicating, while an experienced driver may use 2 points for such activities because they happen without thinking.

This leaves the experienced driver 98 points to drive, the new driver 80.

But then we add in all the other stuff that needs to be taken in and assessed in the course of driving – pedestrians, other traffic, traffic merging in your path, road signs, cyclists, children playing near roads etc. Ideally what we want to be left with is enough points to be completely safe yet still drive correctly, with respect for road conditions, speed limits, other traffic and pedestrians. The ideal would be minimal distractions, a straight road, nothing to distract from the job in hand with particular attention given to children and other road users.

So imagine we’re driving down a straight residential road, grass playing field on the left and a child running about. No signs, no speed cameras, no chicanes or humps. As a moderately experienced driver I have 90 points left to spend and so I can see the risks in this situation. The speed limit is an implied 30mph, it’s a residential area. There is no way I’m going to overlook the child on the left seemingly running towards the road.

Now let’s add the traffic calming etc. I have to spend 5 points looking at and registering some road signs. 10 points assessing the chicane before me. 10 points looking at my speedo to see if I’m ok with the speed camera. The child is obscured by the bollards telling me I have to go into the path of oncoming traffic while positioning myself to not damage my undercarriage or suspension on the hump. Wait, am I still slow enough not to have a fine? There’s a car approaching ahead and one coming from a junction on the right.

Luckily I still have my eyesight, 30 or 40 concentration points left, my reflexes and all is ok. Sadly the new driver behind me didn’t understand that they should give way to the oncoming traffic through the chicane, sped up to get through in time but didn’t realise I’d braked for the speed camera, swerved at the last moment, hit the road hump wrongly twitching the steering, mounted the kerb and hit the speed camera pole which fell over, hitting the child on the head and killing him instantly.

Ok, that one I made up but you can see from the image above that you don’t need imagination to understand that deliberately narrowing lanes and forcing traffic into head-on situations is dumb.

I was recently almost hit by an oncoming car on a road that has 3 humps across it, one in the centre of each lane and one straddling the middle. The oncoming car had to pass a parked car on the left, which would naturally take his wheels over the middle of the hump in his lane and the one in the middle of the road but leave room for oncoming traffic. Not wanting to inflict such a jolt on his passengers or suspension he moved further over to straddle the middle hump instead, almost hitting me as I came towards him in the process. He was in a large German car, obviously.

Is traffic calming safe in any scenario? Maybe some.

Is traffic calming safe in all scenarios? Is it hell.

There’s a reason most F1 accidents happen at chicanes.